The Kids in the Hall Lawyer Goes Public 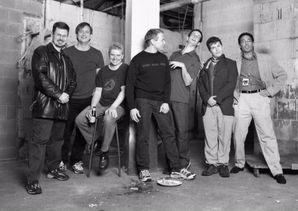 The Kids In The Hall might have created a sketch character like David Himelfarb if he didn’t already exist.

Himelfarb was their lawyer and tour manager since the mid-1980s, and bunked with them on the tour bus.

Fast-talking and prone to telling stories within stories, the colourful longtime entertainment lawyer is going public.

Not with scandalous revelations about Dave Foley or Scott Thompson — but with legal advice.

“I’m like a general practitioner and I direct people to specialists,” Himelfarb says of his start-up consulting website atdavid.com.

Its motto: “Your brother. In law.”

AtDavid follows what I call the “I know a guy” theory.

“And not only do I know a guy, I know a great guy,” he says. “I’m not just sending anybody to some lawyer, it’s someone who is well-thought-of in the legal profession.

“I know everybody because I was social in law school,” he adds. “My friends are judges, senior partners in major law firms. I’ve had a busy practice. I’ve had 35 years’ experience in all areas of law.

“If you’re in trouble, say getting divorced or you’re charged with DUI, first thing you’re going to do is ask your friends if they know a good lawyer. And they may know one. But if they don’t, you can call me. No one would ever second-guess my decision in referring a client to a particular lawyer.”

His website is pretty entertaining — primarily for the hilarious testimonial videos from clients like Foley, Mark McKinney, Kevin McDonald and Jason Priestley.

And hey, the first consult is free.

My own history with Himelfarb goes back as long as long as The Kids In The Hall’s. His name first made the news in the mid-’80s when he sued Cadbury over a series of chocolate ads that used celebrity lookalikes of stars like Burt Reynolds, Bo Derek and Chubby Checker. I first interviewed him then.

“That was misappropriation of personality, something I’d researched a lot in law school,” Himelfarb recalls. He’d written about the subject in an entertainment trade mag and was contacted by reps for Derek and her husband, John. After taking them on as clients, “I called Burt Reynolds’ reps and said, ‘How much are you getting paid? Because my guys aren’t getting paid anything.’

“They said, ‘What are you talking about? We don’t know anything about this.’”

The ads were pulled. There was a settlement. “And the advertising community wasn’t particularly fond of me after that,” Himelfarb says.

Though he’s done all kinds of lawyering, the problematic playing field that is Canadian entertainment remained his first love. As a junior lawyer, he’d already represented Dave Thomas and Rick Moranis for the movie Strange Brew when he was approached by KITH’s Bruce McCulloch on a private matter. When the troupe was signed by Lorne Michaels’ Broadway Video, Himelfarb was there.

But it was after the Kids’ TV series was cancelled by CBC and CBS that he found a new role as a manager. “When they blew apart, I put them back together to do shows. It was, ‘Let’s do three shows or four shows at Just For Laughs.’ Then, ‘Let’s record it.’ Then we found there was an enormous appetite in the U.S. to go back on the road.

“So we did three tours, and each tour I needed to be less hands on. And now they’re able to do it on their own.”

A lifelong entertainment fan, Himelfarb gave his own kids “a close-up look at professional showbiz. We were like gypsies. They slept on the bus with the guys. Two of my three kids, eight berths in these tour buses. Five (Kids In The Hall) guys, me and two kids.” He recalls the troupe putting his son Richie onstage in San Francisco as an extra in the “Citizen Kane” sketch.

“My oldest was, like, 9. They were young and cute. There was outrageous stuff like Scott having a meltdown and my kids watching him, their mouths open.”

He pauses and adds, “It could be difficult too, because Kids In The Hall was a fractious family.”

“It took time away from my practice, but it was an amazing and unique experience.

“I really love practicing law,” Himelfarb adds. “I really love helping people. And in entertainment law, besides getting paid, they come around and hug you.

“You don’t usually get that from insurance guys. They pay you — reluctantly.”